The History of Gaga Ball

How Gaga Came to Camp

Gaga Ball became the #1 game to play at Portage Lake in a matter of weeks. About six summers ago, Mark Ronda, the summer ropes director, led an Experiential – various activities led by staff members that campers can choose to learn/participate in – called “Gaga Ball.” The game came from other camps he had worked at in the past. Mark grabbed eight rectangular tables and set them up sideways, put a volleyball in the middle, and immediately, Gaga Ball was born at PLCBC. About 15 or so Trailblazers played in the first game that morning, but by the end of free time in the afternoon, there was probably 50 campers crowded inside the octagon. Maybe more! That was Trailblazer 1. By the end of 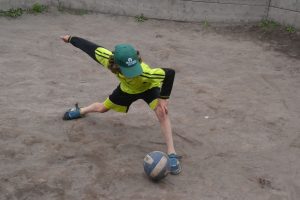 Sr. High Camp (the following week), a work crew came to camp and built the walls for the “pit” that we know, love, and frequently use today. Within just about 10 days Gaga ball was introduced, became a sensation, and a permanent playing area was built. From that day forward, the Gaga pit is THE place to be if you are a camper at Portage Lake, especially on the first day of camp, where most of the cabins gather before dinner to play, creating a cloud of dust and dirt covered hands, feet, legs, and faces…all washed away before dinner of course!

The Origins of Gaga Ball

There are tons of various and entertaining rumors surrounding the internet as to exactly how Gaga Ball and it’s popularity came about, some of the most fun being: 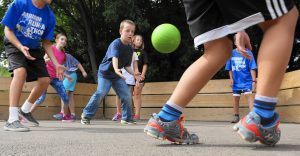 As for the for the real origination, there is still some debate. Most agree that the beginnings of Gaga ball have something to do with Israel. In Hebrew, “Ga ga” actually translates directly to “touch touch” or “hit hit.” One school of thought is that the game was invented in Israel during the 1950’s, made it’s way to Australia, and eventually landed at US Jewish camps, slowly but surely becoming part of the camp culture in the United States. However, there are critics who believe the game started at Camp Idylwold in New York by their owner John Crosley in the 50’s. At Camp Idylwold, they called it“Crosleyball,” and some Israelis who worked on staff that summer brought it home to Israel, where it took on the name of “Gaga.”

No matter where it truly came from, Gaga Ball has become a mainstay at many American camps and schools, and probably will be for years to come!

In case you haven’t been to camp in a while and are wondering what the heck we’re talking about, here’s how the game works: 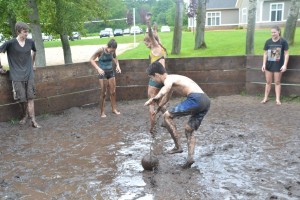 Players gather along the inner wall of the Gaga pit (there are many shapes and sizes of the pit, at PLCBC there is a permanent wooden structure), with the Gaga ball (usually an old volleyball) placed in the middle. At Portage Lake, the champion of the previous round starts the game by saying “Ga, ga, ga!” On the third “ga!” players can rush to the middle and hit the ball at anyone and everyone.

Hitting the ball: Players can only hit the ball once at a time, so once it is hit, you cannot touch the ball again until it goes off somebody or a wall.

Getting out: Players are must exit the pit and game if they are hit below the waste by the ball at any time in any circumstance. They also are out if they hit the ball out of the pit.

Winning: The last person to not get hit below the waste with the ball wins! At PLCBC, when it comes down to the final two or three people, the players who got knocked out in that round chant “GA GA GA GA…” to cheer on the finalists.

Sound like fun? It is! Sometimes the pit is even sprayed with water to add a little mud to the action. The constant action, simplicity, and strategy makes Gaga ball one of the most fun games at Portage Lake. And the messiest!

And what would a week of camp be with without fun and messiness? 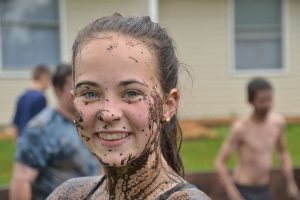 Most of the research done for this blog post was done through this Tablet article. You can also check out some more information about the game in this New York Time’s article! You can also ask anyone who has worked at Portage Lake in the last six or so years. Being a Gaga expert is simply part of the job for most counselors.

Want to come to camp to play Gaga?